​Our Statement of Faith (click here to read it)

The Great Commission Alliance is a non-denominational Christian ministry that is committed to multiplying Christ-like multipliers until the Great Commission is completed. We seek to accomplish this through intercession and prayer, guidance and consulting, next generation ministry, international partnerships, developing great tools, and equipping believers for effective ministry.
​
Our DNA

Each of our team members has been radically impacted by the concept of spiritual multiplication. We have seen people being won to Christ, discipled, and in turn repeating the process. Having seen actual examples of this in ministry, our team is committed to helping believers everywhere do the same. We want to help Christians everywhere become equipped to share their faith and make multiplying Christ-like multipliers.

Our team consists of 15 committed staff. These include (in alphabetical order) Tabitha and Russell Baker, Rachel and Aaron Bickett, Brandon and Anne Cox,  Jesse and Rhonda Denison, Nate and Erin Herbst, Chris and Michelle Kachuriak,  Philip Wilder, and Ben and Meghan Renfro. The Great Commission Alliance is a ministry of the Lighthouse Charitable Foundation. Our team utilizes a shared leadership model of organizational structure. Here is a little more about each of our team members (in alphabetical order).

Russell and Tabitha Baker are driven to see people everywhere intimately walking with God in every aspect of life. With degrees in elementary education and graphic design, respectively, they seek to equip the body of Christ with effective resources and encouragement to fulfill the Great Commission in their spheres of influence.

Aaron and Rachel Bickett have been involved in college ministry for several years and are currently working toward their degrees in World Missions and Theology. Both are passionate about evangelism and discipleship cross-culturally and have a heart for the unreached in the 10/40 Window. They are also excited to be working domestically with next-generation leaders.

Byjumon and Deborah are from S. Asia. Byjumon was born into a Hindu family but Jesus came into his life and saved him many years ago. He and his family are passionate  evangelists. In addition to GCA ministry responsibilities, he is working on a PhD. After finishing, he plans to lead a GCA training center in one of the most strategic and unreached countries on earth.

Jesse and Rhonda Denison had the privilege of serving in full-time college ministry from 2005-2018. During this time, they developed a passion for evangelism, discipleship, and leadership development. Now, as they begin serving with the Great Commission Alliance, they are thrilled to continue mobilizing believers around the world for the glory of God!  Jesse is pursuing a Master’s degree from Denver seminary, which he hopes to incorporate into his ministry with the GCA.

Richard W. Godsil joined the  GCA family in March of 2020. He has over 40 years of working with youth, families and communities in outreach for Christ. With a degree in Youth Ministry and a Master’s degree in Family Development and Education, this has allowed him to be a Youth/Family Pastor, a Fatherhood Coach, a Facilitator in Couples Communication, Marriage/Parenting seminars and a member of the Colorado Governor’s Clergy Council for four years. Richard is the author of an interactive small group workbook, Building a Strong and Loving Family. He is married to his high school sweetheart, Laurie (49 years) and they have three adult children and four grand-children. Richard is looking forward to helping GCA in outreach to families for Christ!

Nate and Erin Herbst have been on staff since 2004 and were both involved in different areas of ministry for many years before. Nate has a PhD in Leadership and he and Erin both have seminary degrees from Liberty University. Erin is focused on training content while Nate oversees team vision and direction while co-leading ministry consulting with Ben Renfro.

​Chris and Michelle Kachuriak joined staff with GCA in 2018. Chris has a BA degree in Finance and has spent the last 15 years working in sales and management. In 2015, Chris and his wife Michelle felt the calling to leave the corporate world and enter into full time ministry in which they made the leap of faith in early 2017 with Master Plan Ministries based out of Durango, Co. They joined staff with GCA in January of 2018 and will be assisting in a number of areas of the ministry with a focus in International Partnership Development as well as developing a program to help support victims of human trafficking.

Philip graduated in 2015 with a degree in education. Since then, he’s spent two years in the Middle East as a missionary with Cru, and one year with Master Plan Ministries on the Denver Auraria campus. He joined the GCA  2018, where he uses his degree and love of story-telling to pursue new and creative ways to reach the world with the gospel as well as develop curricula to train others in discipleship and evangelism.
​
Ben and Meghan Renfro have degrees in pastoral studies and graphic design. They have been on staff since 2015. Ben is committed to helping churches and ministries thrive in evangelism and discipleship (where he co-leads the consulting ministry with Nate) while Meghan oversees the team's graphic design needs. 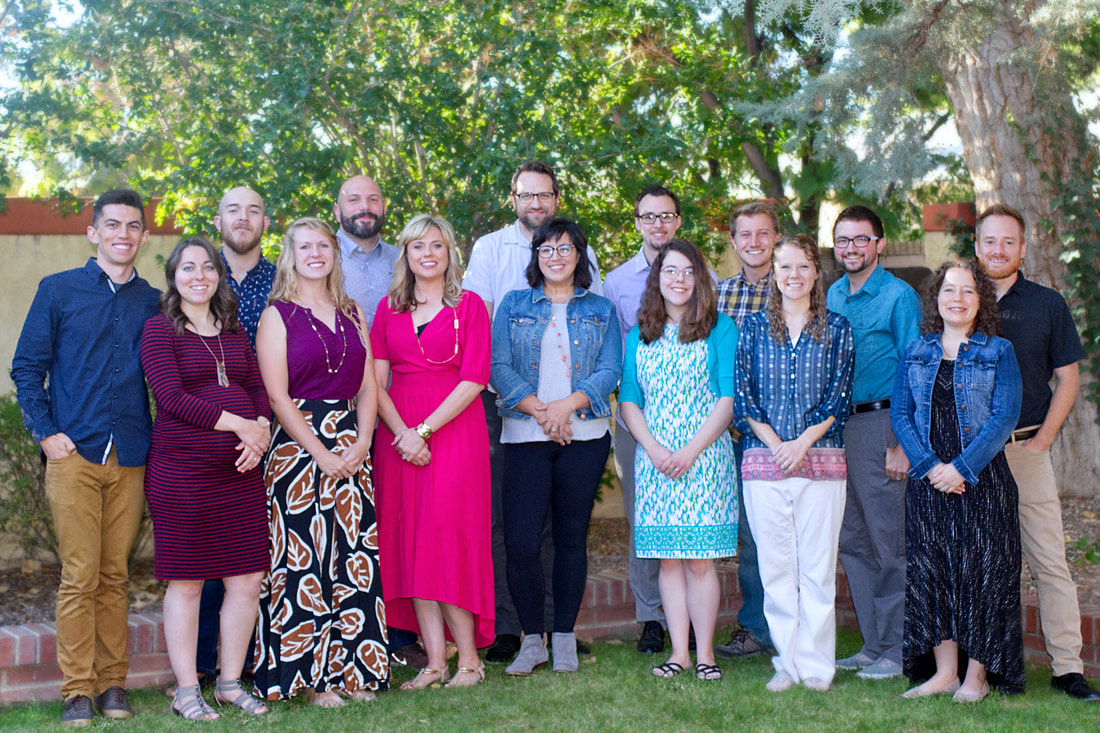 The vision of the GCA grew out of the reality of spiritual mutiplication that we all saw first hand in ministry with college students. Nate and Erin began sensing a calling to equip the Body of Christ to make multiplying Christ-like multiplers.

In February of 2005 the first description of this vision was put on paper in Nate's journal. You can see that below: 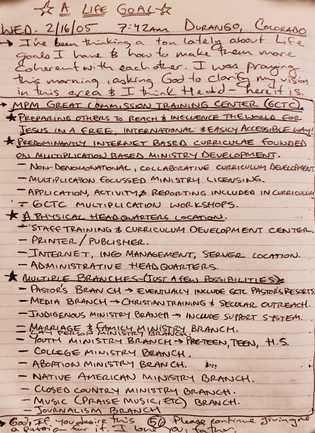 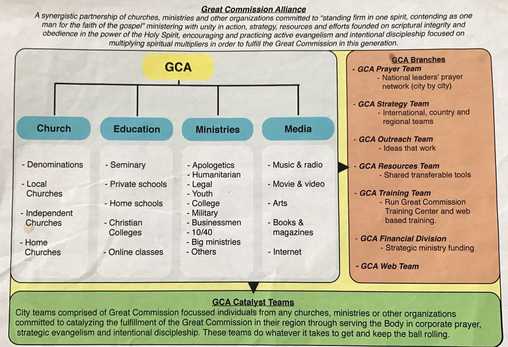 The vision has continued to grow and become clearer since then. Additionally, the Lord has provided an incredible training facility in Colorado along with other training locations elsewhere.